A huge portion of the challenge in building a self-driving car is environment perception. Autonomous vehicles may use many different types of inputs to help them perceive their environment and make decisions about how to navigate. The field of computer vision includes techniques to allow a self-driving car to perceive its environment simply by looking at inputs from cameras. Cameras have a much higher spatial resolution than radar and lidar, and while raw camera images themselves are two-dimensional, their higher resolution often allows for inference of the depth of objects in a scene. Plus, cameras are much less expensive than radar and lidar sensors, giving them a huge advantage in current self-driving car perception systems. In the future, it is even possible that self-driving cars will be outfitted simply with a suite of cameras and intelligent software to interpret the images, much like a human does with its two eyes and a brain.

When operating on roadways, autonomous vehicles need to be able to identify traffic signs in order to determine what actions, if any, the vehicle must take. For example, a yield sign warns drivers that other vehicle traffic will soon enter the vehicle’s path, and that those other vehicles should be given the right of way. Without a robust mechanism to quickly and correctly identify the meaning of traffic signs, autonomous vehicles would get into trouble with hazardous road conditions and with other vehicles.

The pandas library is used to calculate summary statistics of the traffic signs data set:

The following charts show the distribution of the instance classes in the training, validation, and test datasets.

Note how in all of the datasets, some of the classes (1-5,7-10,12-13,38) have a much higher representation in each dataset than others. This may cause bias in the predictions generated by the classifier itself; additional classification robustness could be added by adding extra instances of the classes which are under-represented. 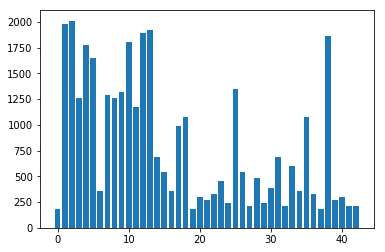 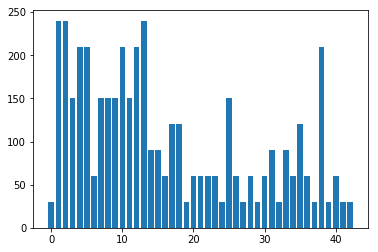 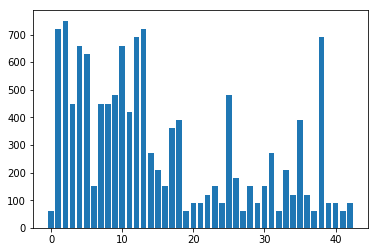 Design and Testing of model architecture

As a first step, all images are converted to grayscale to reduce the dimensionality of the problem that the classifier needs to learn. Given the small number of training examples (< 100k), the extra dimensionality in representing colors might overwhelm the optimizer and it would not fit a robust model. Grayscale was also used in my previous lane finding project, and given the success of finding detail in a low-resolution grayscale image similar success here is expected.

Here is an example of a traffic sign image before and after grayscaling.

As a last step, image data is normalized to have mean zero and low standard deviation for each pixel value, to allow the learning optimizer to have an easier time converging on a lower overall classification loss.

Even though a class imbalance exists in the training data set, the training set is not augmented with more data to study the bias of the final classifier (which would be revealed during the validation step).

The neural network model consists of the following layers:

To train the model, the following techniques are used:

The final model results are:

Modifications are added based on the Alexnet image processing architecture, as it is also well-understood and makes significant performance improvements on LeNet. Further modifications include using 50% dropout layers after every fully connected layer to prevent overfitting on training data, making the fully connected layers not reduce dimensionality (input and output dimensions are the same until the final output layer), and starting with initial positive values for layer bias terms rather than zero (since ReLU is used as an activation function, it is desired to prevent more connections to drop out than absolutely necessary).

Training set accuracy shows that the model is fitting to the training data well; perhaps too well, as a 97% accuracy is quite high. Luckily, the difference in performance between the validation and training sets (delta of 3.3%) shows that the model is not overfitting too greatly. Test set accuracy of 90.5% indicates that on completely unseen data in the real world, this classifier would classify slightly better than nine of out ten traffic signs correctly, which is interesting academically but surely would be a problem for a true self-driving car (as even one incorrectly classified traffic sign could prove disasterous).

Validation with images from the internet

Here are five German traffic signs that were pulled from the internet:

This image may be harder to classify, as it has a changing background image due to the horizon.

This is likely to be a simple image to classify; it is clear with an empty background.

This image has a solid, though black, background which is likely to be easy to classify (even with a small fleck of black in the right side of the triangle).

This image is likely to be difficult to classify, being captured at a non-perpendicular angle, as well as having a complicated background involving the ground, sky, and clouds of different colors and shapes.

This image should be relatively easy to classify; it has some background noise but the image itself is clear except for some clipping at the bottom of the circle.

Comparison of predictions from original set and internet images

The model is able to correctly guess 4 of the 5 traffic signs, which gives an accuracy of 80%. Due to the limited number of test examples in my set of 5, the accuracy of 80% is lower than the original test set accuracy of 90.5%.

The code for making predictions on the final model is located in one of the last cells of the Ipython notebook.

For the third image, the model is almost sure that this is a Bicycles Crossing sign (probability of 0.95); however, the image contains a Bumpy Road sign. Note that Bumpy Road is the second highest softmax probability, but it much less confident about this prediction. The top five soft max probabilities are

For the fourth image, the model is almost completely sure that this is a Road Work sign (probability of 0.99), and the image does contain a Road work sign. The top five soft max probabilities are