This is the eleventh post in a series about Reducing Gun Violence in the United States. The previous post described Waiting Periods and Red Flag Laws.

No broad federal laws exist that regulate open carry of firearms. Most states allow open carry of either handguns, long guns, or both. Some states require a permit for open carry, but most do not. Some states also limit where firearms can be openly carried; for example, restricting open carry of guns in religious buildings or college campuses.

May issue laws are the most strict. They include baseline requirements for carrying a concealed gun in public, such as having no felony convictions or age restrictions. In addition, even if those requirements are met, the state is not obligated to issue a permit – they might deny issuing a permit based on some likelihood that the permit holder might hurt themselves or others. This is generally called “permit discretion”.

Permitless laws are the least strict. As long as you are legally allowed to own a firearm, then permitless laws allow you to carry it concealed in public with no extra permit or license.

Shall issue and permitless laws are often referred to together as “Right to Carry” laws, which we’ll explore in more depth later in this post. 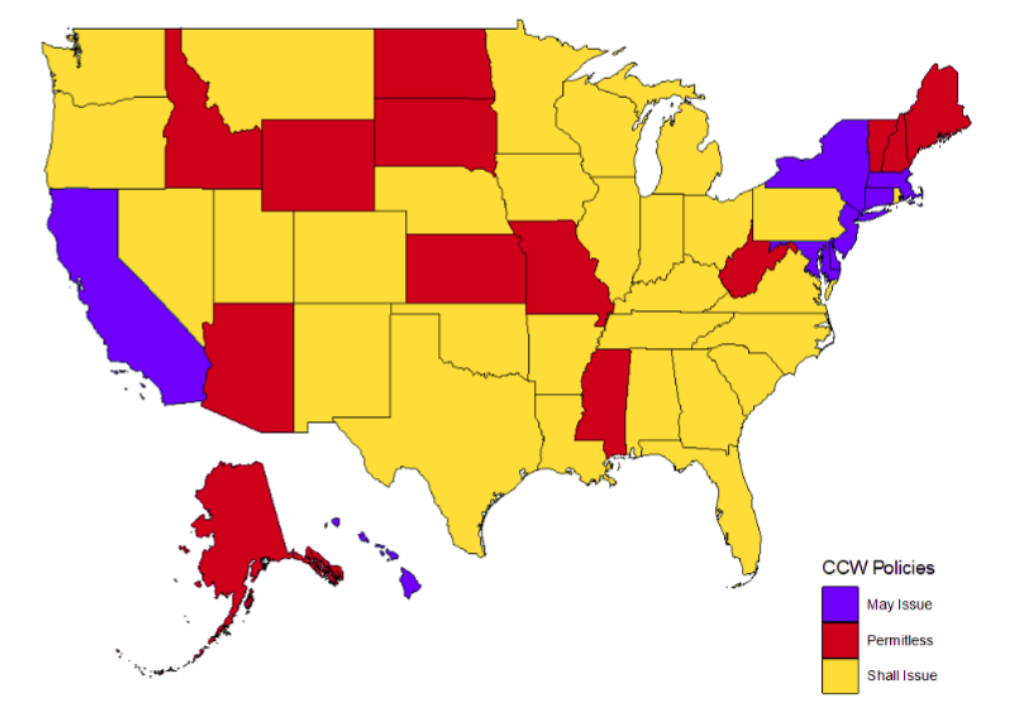 As seen above, most of the country falls into the shall issue law group, with 84% of states being “Right to Carry” states (42 of them).

Concealed carry laws vary significantly in their implementation and requirements, for example, in:

Generally, the amount of discretion that states have on whether they must issue a permit varies widely.

Training requirements for concealed carry permits vary significantly as well. Some states require specific courses that need be taken, such as safe storage, specific laws, or specific use cases for guns. Some states allow online courses.

A notable data point: of the 31 states that require training courses for concealed carry of a firearm, only 18 of them require actually firing a gun. In some cases, that just means “you’ve fired a gun on a firing range”, while others indicate some level of proficiency, such as target accuracy.

Yet, while it is good that 31 states have training requirements, none of those 31 require the applicant to demonstrate competency in decision-making with regards to firearms, such as knowing when it is lawful or justified to use a concealed firearm.

Over the last forty years, there has been a significant shift in the “Right to Carry” law landscape in the states. 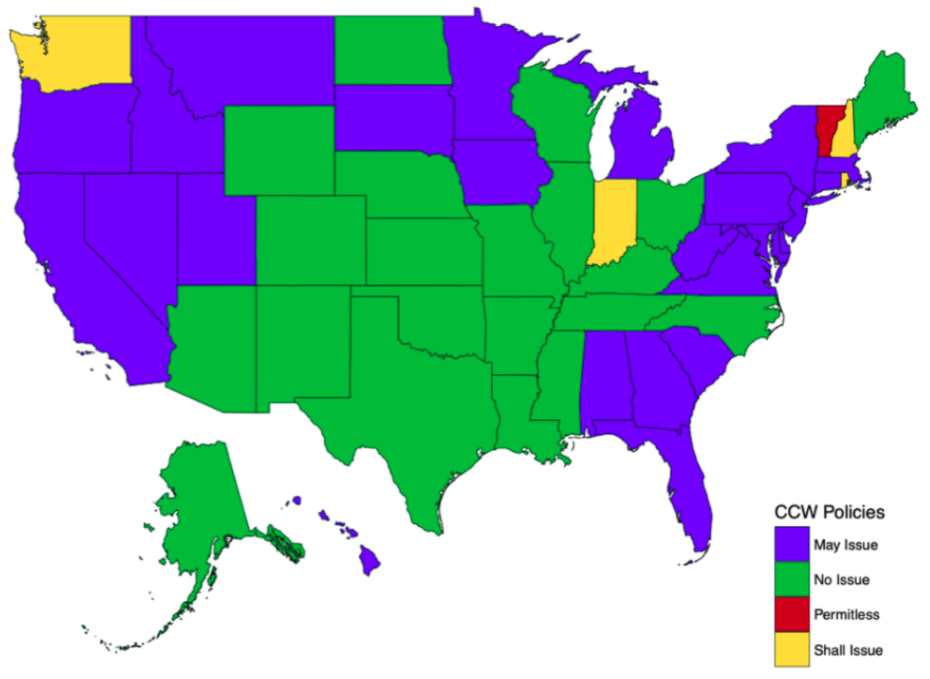 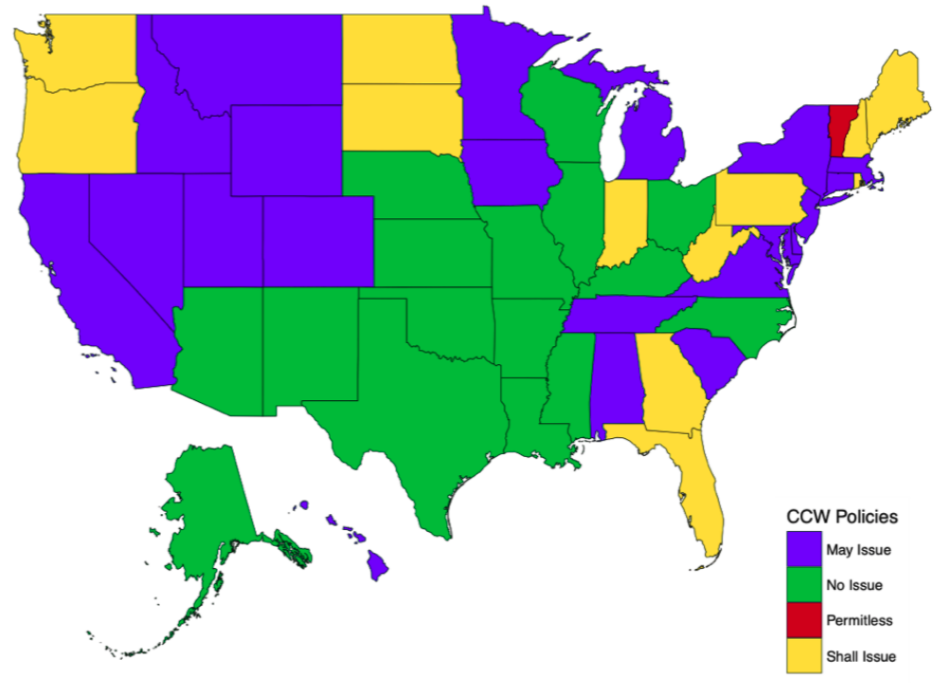 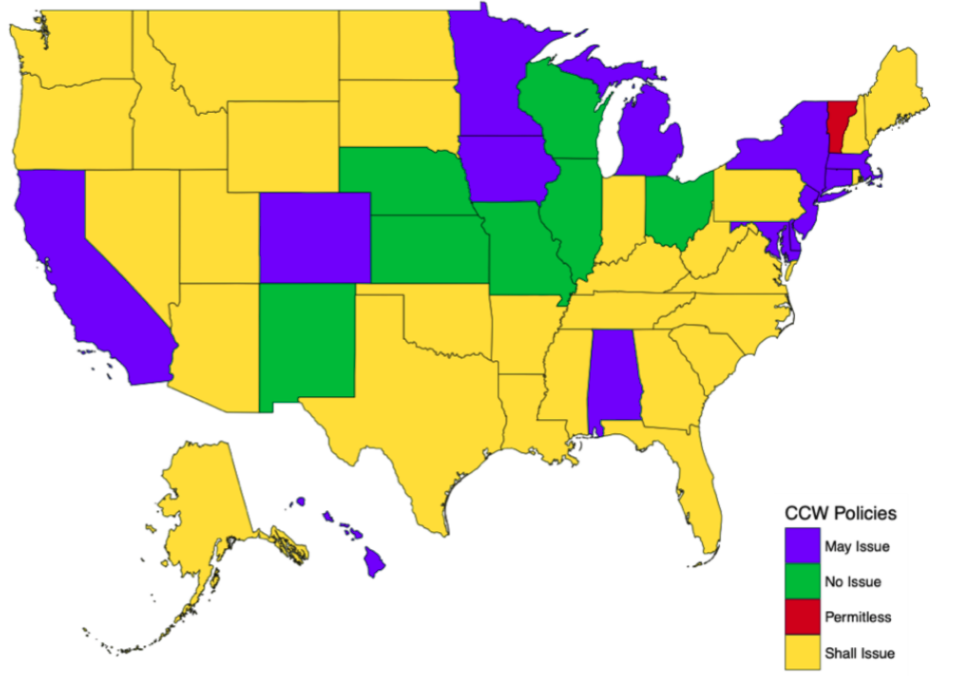 Fast forward another ten years to 2000: 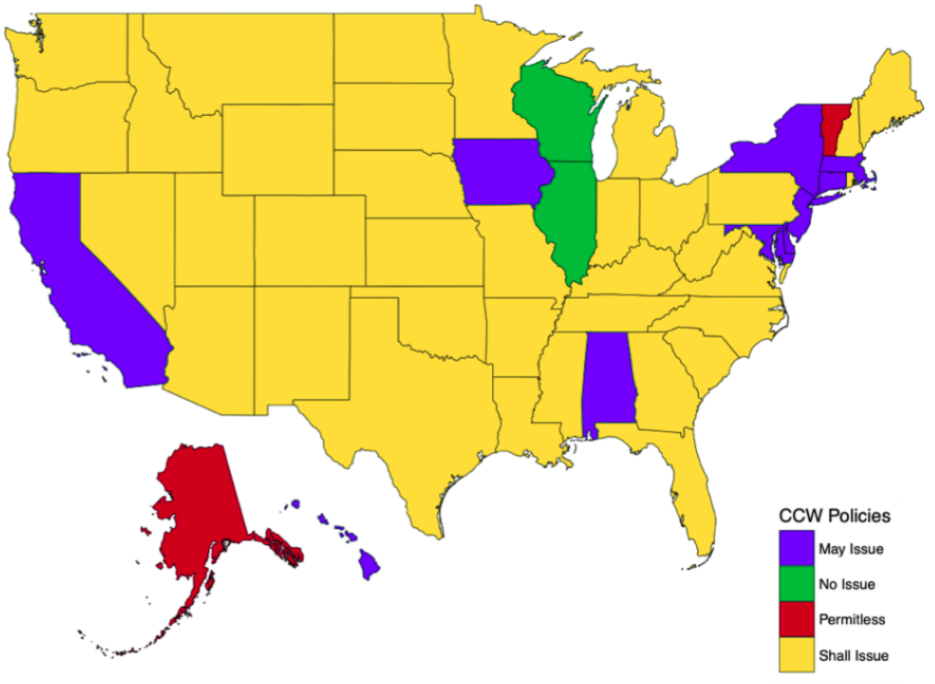 Fast forward another ten years to 2010: 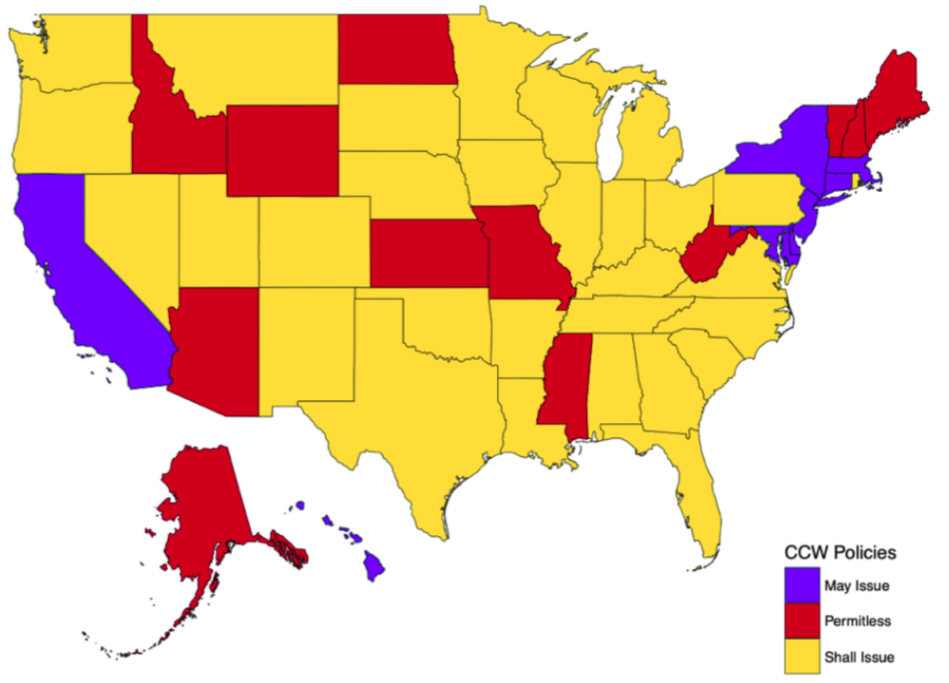 With all of this change, we can look at research on how this has affected society overall.

One of the first early research results showed, in 1998, that more people were carrying concealed guns as a result of these laws. The researchers theorized that this would deter and prevent crimes, and it presented evidence that this was the case. Unfortunately, the data and results were closely scrutinized and were found to have major data and research errors, invalidating the conclusions of this first study (sources: Crime and Deterrence, Firearms and Violence, Impact of Right to Carry)

Newer research, since that time, has uncovered a variety of effects about the rise of “right to carry” laws (source: Right to Carry Laws), primarily:

Why might this be the case? “Right to Carry” laws enable more guns to be available in public, both on a person and in vehicles for criminals to steal. Criminals might also suspect that in the course of committing crimes, they will have a higher chance of encountering an armed civilian, and so they themselves carry more guns during their criminal activities. Sometimes, these findings are directly connected to a rise in general fear in society that other people might be carrying guns, so individuals think the best thing to do is to carry a gun themselves. This leads to an “arms race” of civilians carrying guns in public.

Percent increase in violent crime every year after a “Right to Carry” law is in effect (source: Right to Carry Laws)

Also revealed in that study time period, in which 33 states passed “right to carry laws”,

Two other studies in 2017 and 2018 looked at how “right to carry” laws impacted homicide rates, looking at states with “shall issue” laws. Those studies found (sources: Easiness of Legal Access, Homicide in Urban Counties): 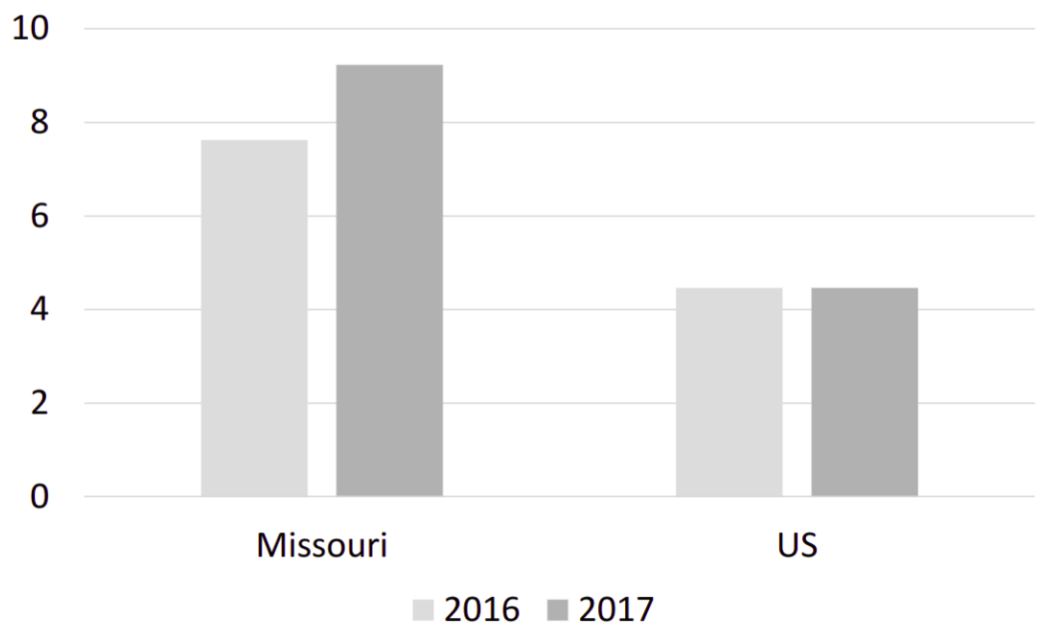 A final case study on “right to carry” laws: Missouri has greatly loosened restrictions on concealed carry of firearms over the last few decades. In 2017, it became a permitless concealed carry state. One year of firearm homicide data is available since it became a permitless state, and it clearly shows that rates increased from seven to nine homicides per 100,000 during that period, while rates stayed completely flat for the US overall.

“Stand your Ground” laws define when it is legally justifiable to use lethal force, often referring to what is called the Castle Doctrine. While I’ll cover these laws in more detail later, in short, they say that when you’re faced with a dangerous situation, you are not legally obligated to retreat, and may use lethal force to defend yourself. The intent of these laws is to deter crime, under the hypothesis that if a potential burglar, robber, or assailant knows that a victim may defend themselves with lethal force, they may choose not to commit that crime.

In short, the laws did not have the effect that they intended, and actually increased the rate of homicide.

The fact that concealed carry of firearms is now more accepted than it ever was before makes it important to keep these statistics in mind. As more people carry guns in public and have a legal justification for using their guns to defend themselves rather than trying to run away, it’s no surprise that the number of firearm homicides is up. In particular, in Florida, there were three times as many concealed carry permit holders in Florida in 2015 as there were in 2005 when the “Stand your Ground” law was first enacted (source: Evidence from Castle Doctrine).

One of the most famous highlights of “Stand your Ground” laws appeared in the slaying of Trayvon Martin, an unarmed 17-year old, in Florida. There is a substantial amount of research to show that there are implicit biases that are pervasive in the United States with regard to black individuals, especially black males. The implications of an ever-growing gun-carrying public may very well have serious implications on opportunities to act on racial bias in a lethal way.