This is the first post in a series about Reducing Gun Violence in the United States.

To put this into perspective, this is just slightly more than the number of deaths due to motor vehicle crashes (around 37,000).

In order to really understand the scope of the problem of gun violence in the United States, let’s start by looking at the data itself. It is important to know that the data will not tell us why there is so much gun violence, but it will provide context.

Now, let’s dive into how gun violence shows up in the United States.

Those roughly 40,000 deaths due to firearms can be broken down into several categories (source CDC Wonder):

Slicing this data another way, we can look at the number of people admitted to hospitals with non-fatal gunshot wounds, and how they got there. Note how more than three-quarters of these people were admitted due to assaults (source: CDC Wonder):

Let’s take a look at the rate of firearm homicides and suicides overall. The number of suicides due to firearms has been significantly bigger than the number of homicides for almost twenty years, with a big increase in suicides since 2006.

Men have a much greater rate of being involved in firearm violence than women; more than 90% of people killing others with guns are men, and almost 90% of suicide victims are men.

Fractions of firearm homicide and suicide per gender in the US, 2017 (sources: CDC Wonder & FBI Crime in the US)

Three of the biggest racial groups that experience firearm violence in the US are whites, blacks, and Native Americans. There is a much larger rate of homicide (both as offenders and victims) among blacks, though the suicide rates are more evenly divided though slightly higher for whites:

Firearm homicide offenders, homicide victims, and suicide victims per race per 100,000 people in the US, 2017 (sources: CDC Wonder & FBI Crime in the US)

There is a rise in suicide rates as people age:

However, the number of Americans involved in homicides by age looks very different. Victims of gun homicide peak around age 21, and those pulling the trigger on those guns also peak around ages 18-20. 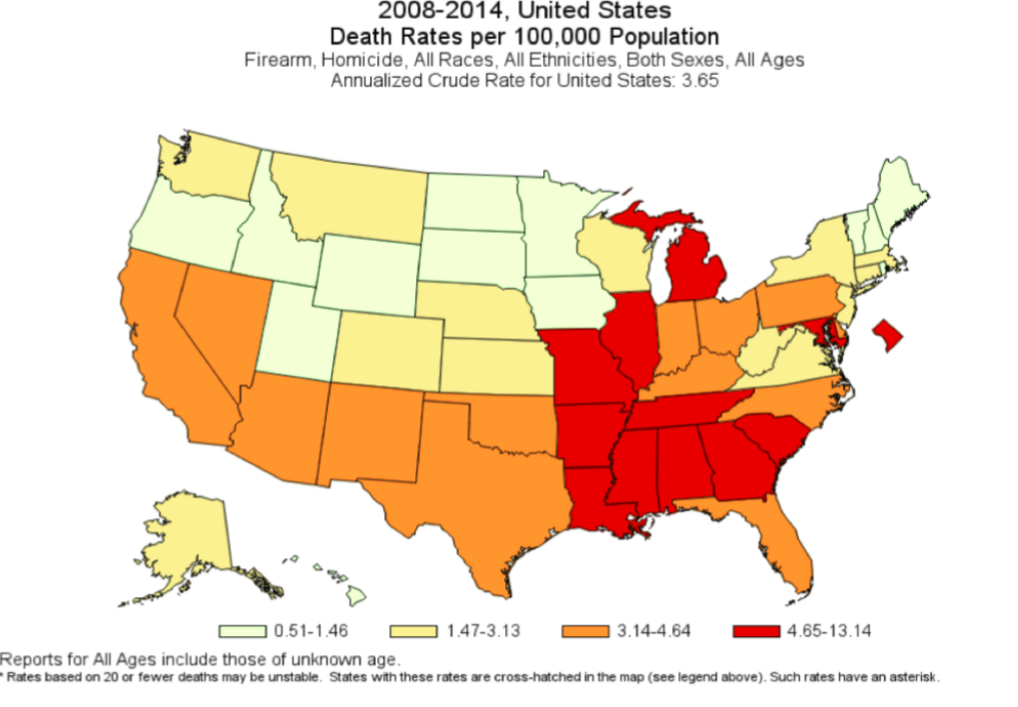 And, if we look at firearm suicides, some of the Northern Plains states have the highest rates, likewise with some other states in the interior: 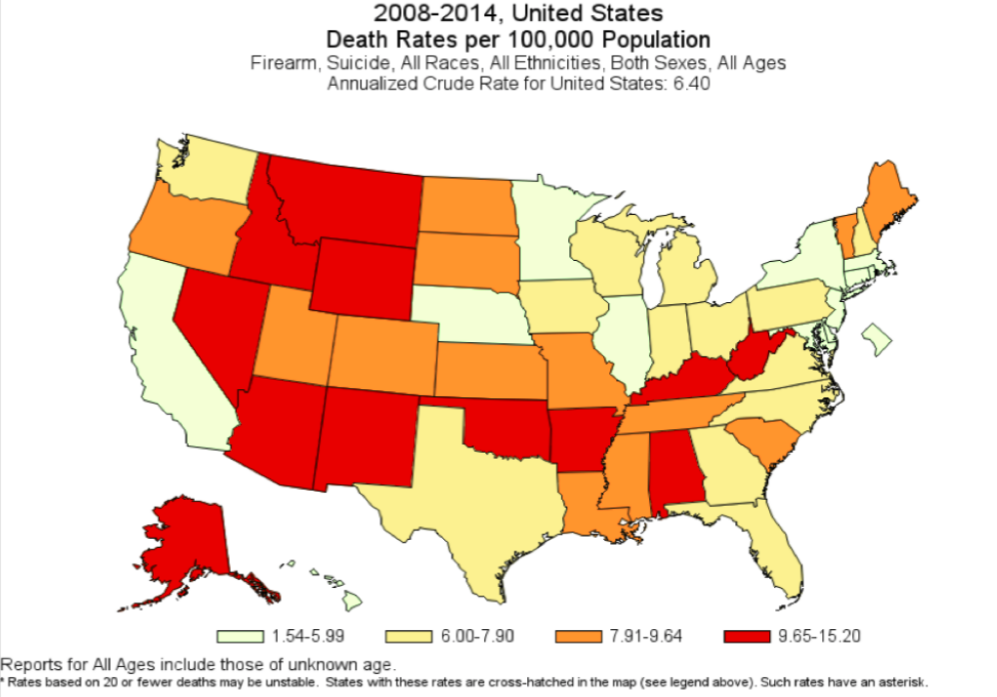 The highest rates of firearm suicide tend to be in rural and non-metro areas. Firearm homicides are generally highest in large metro areas, but then don’t shrink as dramatically in rural areas as some people would expect:

Firearm homicide and suicide rates per area, 2017 (sources: CDC NHSS and US Census)

About four in ten US adults say that they live in a house with a gun (source Pew research): 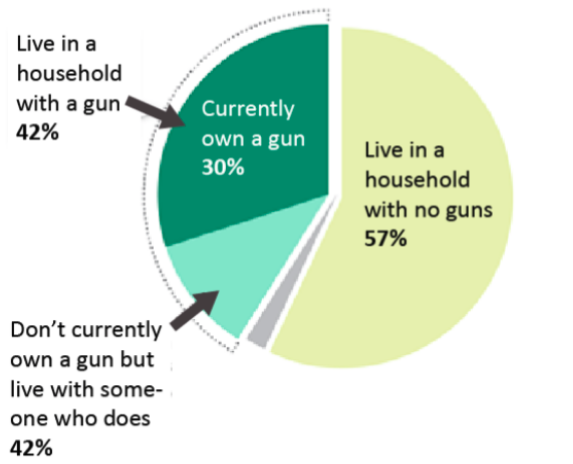 Who are these gun owners?

Breaking down owners among gender and race, it’s more common for whites and men to own guns (source Pew research):

White men report that almost half of them (48%) own a gun, and the average age for an American to become a gun owner is at age 22.

Where do gun owners live?

Why do people own a gun, and what kinds do they own?

People give different reasons for owning a gun, and most people give multiple reasons (source Pew research):

Similar numbers appear for the types of guns that people own (source Pew research):

Gun ownership over time has been gradually decreasing. The following chart shows the percentage of people in the US who own at least one gun (source NORC GSS):

Though the number of people who own handguns or pistols fluctuates without a clear pattern (source NORC GSS): 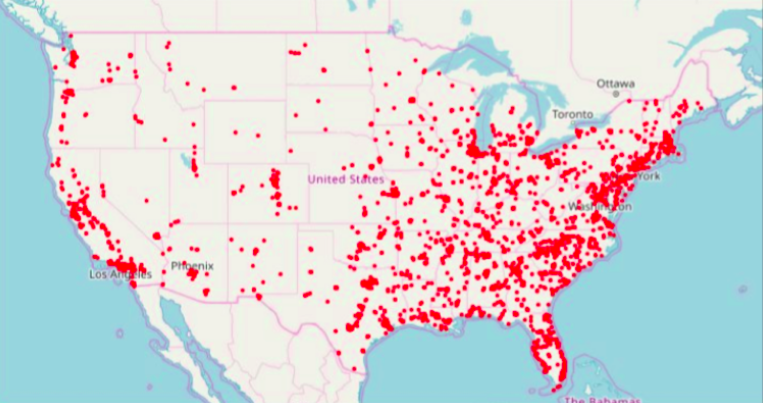 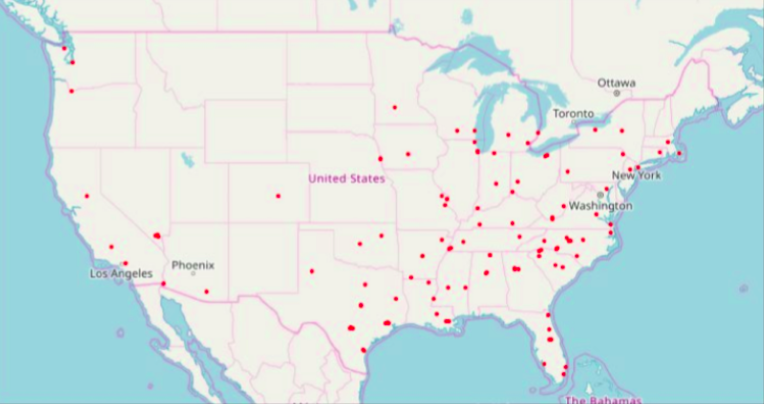 This data is confirmed by Pew Research, which finds that guns are used for self-defense in less than 1% of crimes. This is contrasting with data saying that 67% of gun owners own guns for self-defense.

Another two particularly interesting data points to note are:

… meaning that there isn’t a benefit to using a gun in self-defense, statistically – you’re just as likely to get hurt as if you didn’t use a gun.

What’s the legality of using a gun in self-defense?

Only 43% of the self-reported use of guns in self-defense are actually deemed to be legal by criminal court judges. In other words, most people who report using guns for self-defense aren’t legally allowed to do what they did. (source: Gun Use in the US)

Certainly, some use of self-defense is legally justifiable, just not all of it.

What about anger and impulsivity?

9% of US adults (4 million people) have a history of angry and impulsive behavior and have access to firearms in their home.

Those adults who own six or more guns are four times more likely to carry a gun and show angry and impulsive behavior than those who own just one gun (source: Anger / Impulsive)

Next up: Gun Markets, Ownership, and Violence Risk