This is the second post in a series about Reducing Gun Violence in the United States. The previous post described Impact, Trends, and Defensive Use.

In this post, I’ll explore the various legal and illegal methods in which people acquire guns, as well as the risk of violence due to that gun ownership.

Almost every gun used in crimes in the United States was first acquired through a vendor with a federal license to sell firearms. The US Bureau of Alcohol, Tobacco, and Firearms (ATF) automatically receives information about each and every gun that is sold and anytime local, state, or federal law enforcement officers recover a gun from a crime scene or criminal suspect.

Each gun has a unique serial number, which identifies the make, model, and caliber, and can be used to trace where the gun was originally purchased.

Here are some examples of serial numbers on guns:

The ATF has a great flow chart showing how guns enter the illegal market: 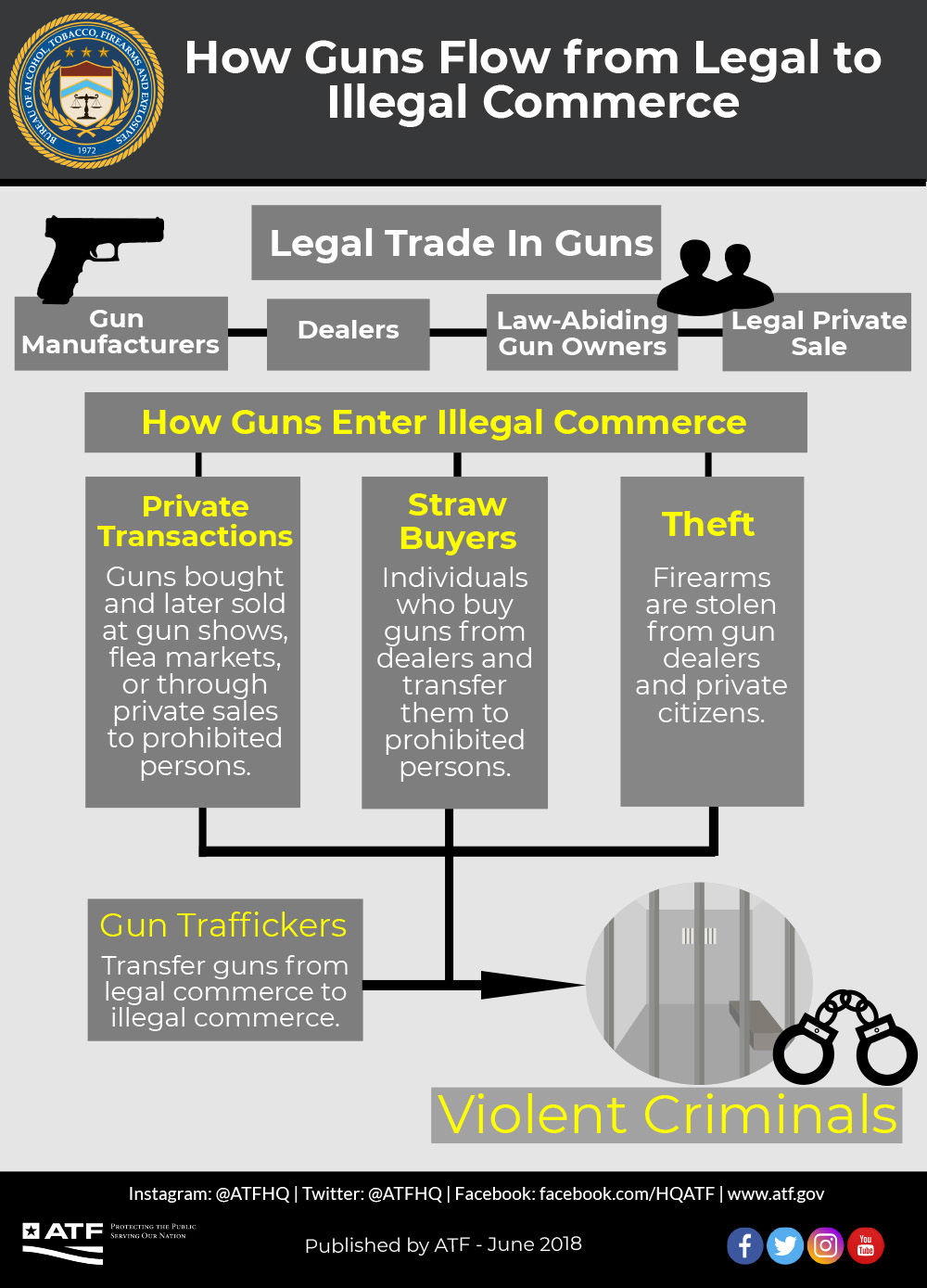 Now, let’s take a look at how many guns enter the market illegally via different avenues. Note how the number of firearms (N firearms) being sold or otherwise transferred by federally licensed dealers without reporting to the ATF (largely to gangs and other criminals) is greater than those for straw purchasers or private sales. It also dwarfs the number of firearms stolen or those obtained via filling out paperwork illegally.

When looking at sources of firearms reported by state and federal prison inmates, the largest share of those guns were acquired illegally through the underground market, not through legal purchases, gifts, theft, or buying for someone else. It’s important to note that the “underground market” could mean many things: traffickers selling guns state to state, selling a gun on the street which was stolen from a car, or many other things.

Source of firearms used in crimes by State and Federal prison inmates, 2016 (source: Source of Firearms)

While prison inmates report that only 6% of guns are acquired via theft, an estimated 350,000 – 400,000 firearms are stolen every year. The majority of guns stolen come from Southern states. These Southern states account for (source: Whose guns are stolen):

Additionally, higher gun theft risk is associated with (source: Whose guns are stolen):

When a person is involved in an assault, the availability of a firearm can increase the severity of any violent actions. One big reason that having a firearm available to someone who might consider committing a violent act might increase the chance of that act occurring is that possessing a deadly weapon as an assailant lowers their risk of injury. After all, if one is going to break into a person’s house and they have a gun, they’re probably going to face less resistance than if they just have their own fists.

If you, as an assailant with a gun, have less resistance in committing a crime, wouldn’t there be less chance of physical violence occurring? Or, if you protect yourself with a gun, aren’t you less likely to come to any harm because you have a deadly weapon which can protect you? Unintuitively, it turns out there is evidence that having a firearm could actually cause a more dangerous attack from someone who is armed.

It’s not difficult to imagine how this situation turns into a chain reaction, where potential criminals begin to carry more and more dangerous weapons, and if you’re a person concerned with lethal violence in your community, you begin to carry more deadly weapons such as guns yourself.

Reflecting on this, an important question to ask is:

Does keeping a firearm in one’s home increase, decrease, or have no effect on the risk of gun homicide in the home?

A few different studies in the US have led to some important observations (sources: Gun Ownership as a Risk Factor, Handguns and Firearm Violence, Risk Factors for Femicide)

So, most often, gun homicide is a result of some kind of conflict in a home. Similarly, having a gun the home dramatically increases the risk of firearm homicide, especially for women as victims.

Another interesting question we can ask is:

Are people who purchase handguns legally more likely to be violent offenders?

A 2010 study in California found that after purchasing handguns (source: Violence Criminal Activity):

So, if one has a previous violent crime conviction, they’re over five times more likely to commit another violent crime after purchasing a handgun

For all people purchasing handguns,

An important takeaway: law-abiding gun owners are even more law-abiding than the average person. But, those people that have serious criminal histories are at much higher risk for future offenses.

Gun Assault Rate Ratio for Gun Ownership (source: Firearm Ownership in the US)

Reflecting on this, if there is more violence with places that have more guns, why is this? Is it something about the place itself, or does it have to do with the individuals who own guns?

Next up: Firearms and Suicide