This is the third post in a series about Reducing Gun Violence in the United States. The previous post described Gun Markets, Ownership, and Violence Risk.

In this post, I’ll introduce the relationship between firearms and suicide.

The number of firearm deaths due to various causes looked like this (source CDC Wonder):

Suicide rates vary dramatically across the various states, with some states having as many as four times the number of suicides as other states: 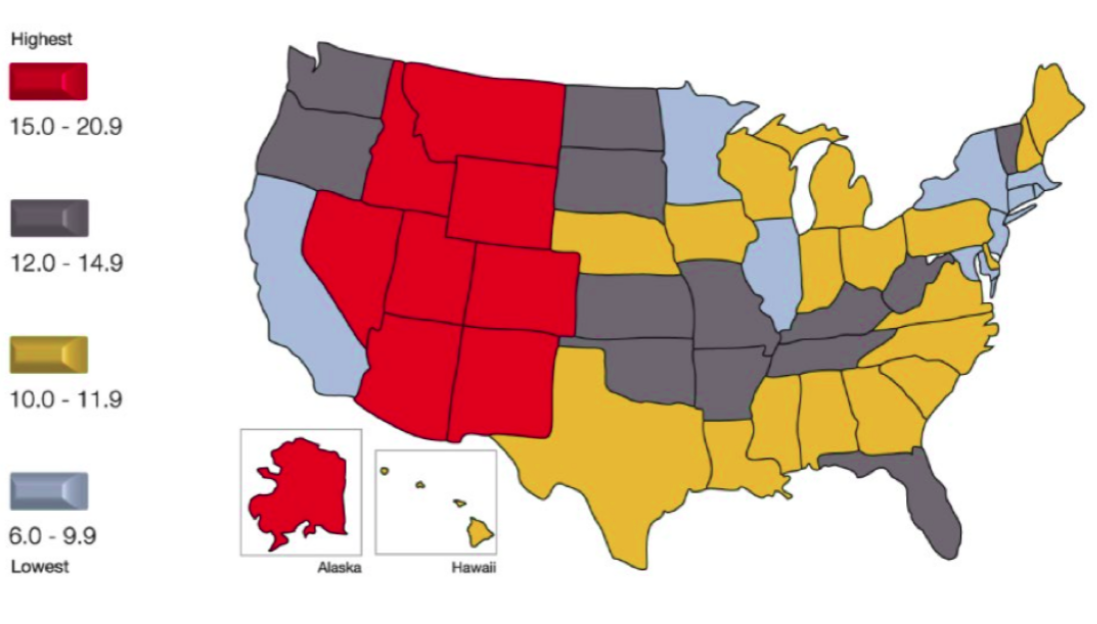 Let’s continue looking at the rates of firearm ownership and suicide, firearm suicide, and non-firearm suicide across several states. What we see is that

Rates of firearm ownership and suicide (source: Firearms in the Northeast)

Let’s take a look at acts where people try to harm themselves:

In short, when people use a firearm to hurt themselves, they are very, very likely to end up with a fatality.

Looking at the data another way:

A key insight is that if access to firearms is difficult for people in a crisis where they are considering suicide, they are more likely to use a different method, which is much more likely to result in a life being saved. 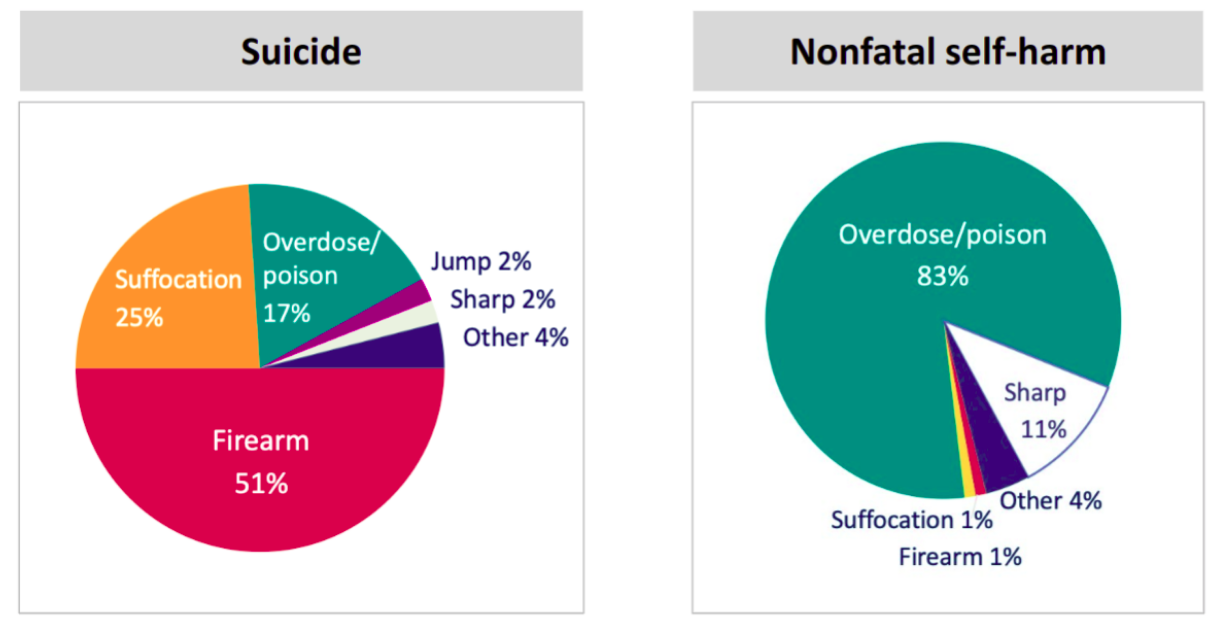 When reviewing cases of survivors of suicide attempts, we find some interesting other information:

Saving a person who has suicidal thoughts today means very likely saving their life in the long run.

How do we know that firearms availability actually is a cause of increased suicide risk, rather than just being correlated with it?

More than a dozen studies between 1991 and 2005 show that having a firearm in a home greatly increases the risk of suicide for all members of the household, especially young adults and children. These studies controlled for age, alcohol usage, community, depression, education, illegal drug use, medication usage, and mental health diagnosis. 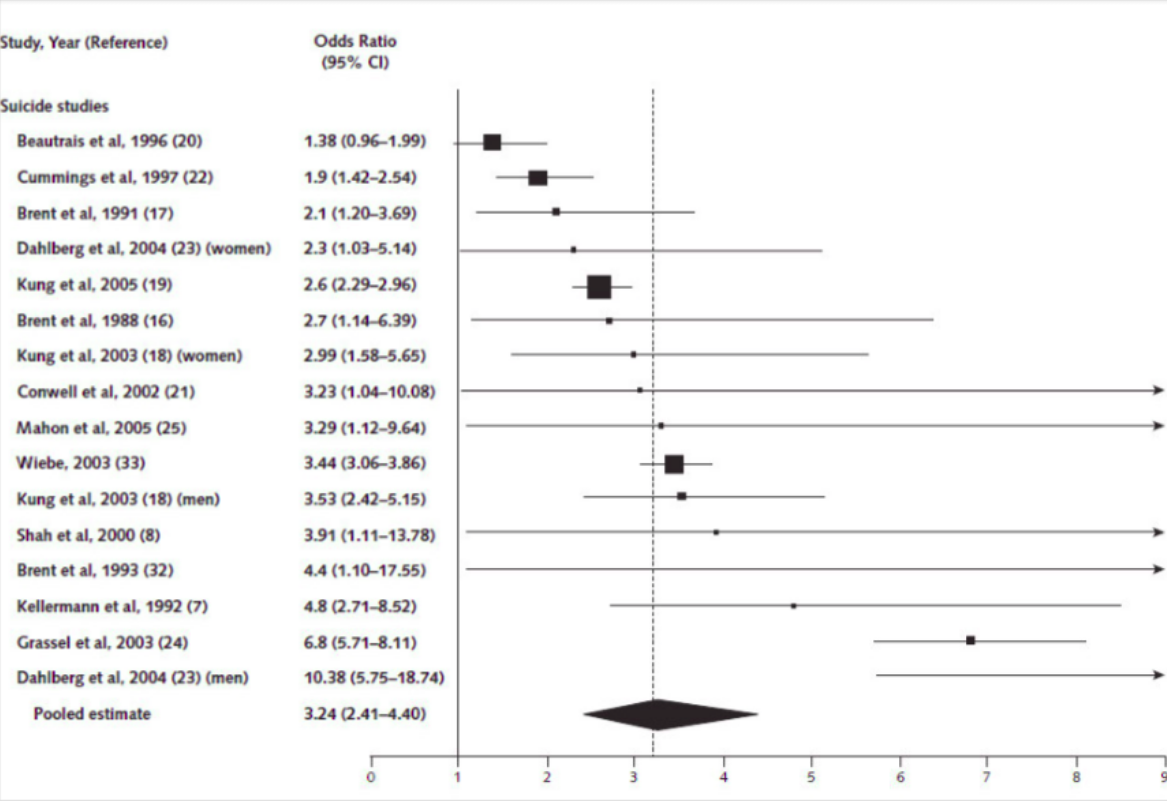 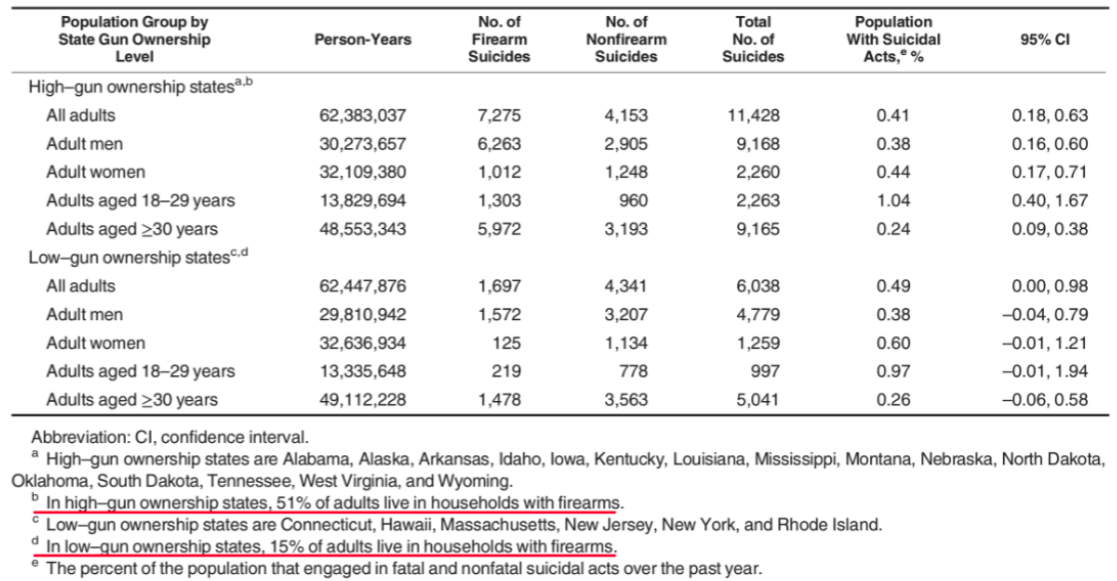 Let’s return to the topic of what we know about these guns that are in people’s homes:

The result? (source: Decrease in Suicide)

Are we using this data that we know?

As seen above, strong evidence exists that firearms do play a direct role in increasing suicide risk. Are we actually using this information?

A survey of emergency department employees, doctors, and nurses who worked with suicidal patients were asked if they thought restricting access to firearms would affect the suicide rate. They were asked the question:

“Had a firearm not been accessible to them, how many do you think would have found another way to die by suicide?”

The results were that a large fraction thought that most or all of the firearm suicide attempters would have found a similarly lethal way to die by suicide if their firearms had not been available (which we know is not true by the data presented above):

Would suicide victims have died by another means if firearms were not available? (source: Lethal Means Restriction)

Those healthcare providers were then asked if they asked suicidal patients if they had firearms in their home.

Do you ask if firearms are at home? (source: Lethal Means Restriction)

Does a gun in the home increase the risk of suicide? (source: Suicide Relationship Belief)

Generally speaking, members of the public do not believe the reality of the data about suicide prevention which shows that having a gun at home substantially increases the risk of suicide, both for the owner themselves and other household members.

Are we using this data that we know?

Next up: Laws, the Second Amendment, Litigation, and Obstacles to Research and Policy