This is the ninth post in a series about Reducing Gun Violence in the United States. The previous post described Background Checks and Purchaser Licensing.

In this post, I’ll explore using gun dealer oversight and regulation as a method to keep guns out of the hands of people who are prohibited from owning them.

How big is the problem of guns falling into the hands of criminals?

Let’s review some data from my previous post on Gun Markets, Ownership, and Violence Risk, and recall how many guns enter the market illegally via different avenues. In particular, I want to draw attention to three specific entry points:

Let’s first focus on straw purchasers / straw purchase rings. This represents cases where someone purchased a gun for someone else (which is illegal). This is a fairly common practice (more than 38 thousand firearms recovered in a three year period) in which gun dealers “look the other way” or simply are not doing a sufficiently careful job selling guns to those who are allowed to have them. This represents the largest number of firearm trafficking investigations by far, and there are a variety of voluntary efforts that honest gun dealers are participating in to help identify these purchasers.

Next, let’s look at firearms stolen from licensed dealers. As it turns out, there are no federal laws that set standards for securing a gun dealer’s property against theft. Think about how easy it is for a criminal to break a glass window of gun shop overnight and make off with a large number of guns.

Finally, let’s look at firearms “diverted” by licensed dealers. Diversion, in this case, means a gun dealer who is actively and knowingly handing guns to criminals. Note that over 55 thousand guns were trafficked by “dirty” dealers in a three year period – more than any other type of gun trafficking. Clearly, this is a huge problem.

Let’s take a look at one particular investigation into firearms diverted by licensed dealers, just one of the 158 investigations conducted between 1999 and 2002. The study is of a gun shop in West Milwaukee, Wisconsin – Badger Guns & Ammo. 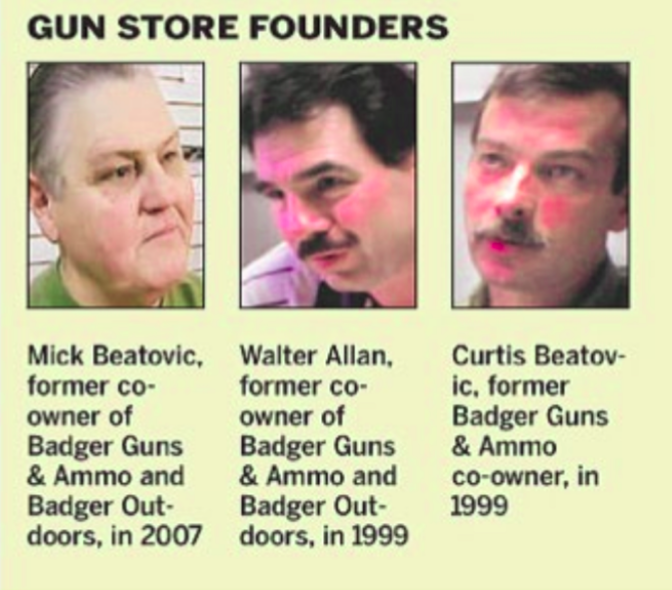 In 1999, the federal Bureau of Alcohol, Tobacco, and Firearms (ATF) identified Badger of being the number one seller of guns used in crimes in the US. Remember from my post on Gun Markets, Ownership, and Violence Risk that the ATF automatically receives information about each and every gun that is sold and anytime local, state, or federal law enforcement officers recover a gun from a crime scene or criminal suspect. This 1999 report made national news, and two days later, Badger announced publically that they were going to make voluntary changes to their sales activities.

Badger was not the only gun dealer being highlighted as selling many guns used in crimes; many dealers in the late 1990s and early 2000s were being flagged in this way. Some of these large gun dealers flagged had “friends” in high places, including politicians like Todd Tiahrt. Does that name sound familiar? Recall the Tiahrt Amendment of 2005 from my post on Laws, the Second Amendment, Litigation, and Obstacles to Research and Policy – the law that:

Tiahrt essentially provided regulatory cover for shady gun dealers like Badger. Recall from that previous post on Laws that also in 2005, Congress passed yet another law, the Protection of Lawful Commerce in Arms Act (which provided broad protections to gun manufacturers and dealers from legal liability), which restricted lawsuits against gun dealers like Badger.

Ultimately, in 2006, the ATF recommended the revocation of the federal firearms dealer license from Badger, but not before thousands of guns were illegally made available to criminals who should not have had them.

Guns diverted to criminals within a year of retail sale, Badger vs other dealers (source: Temporal Association) 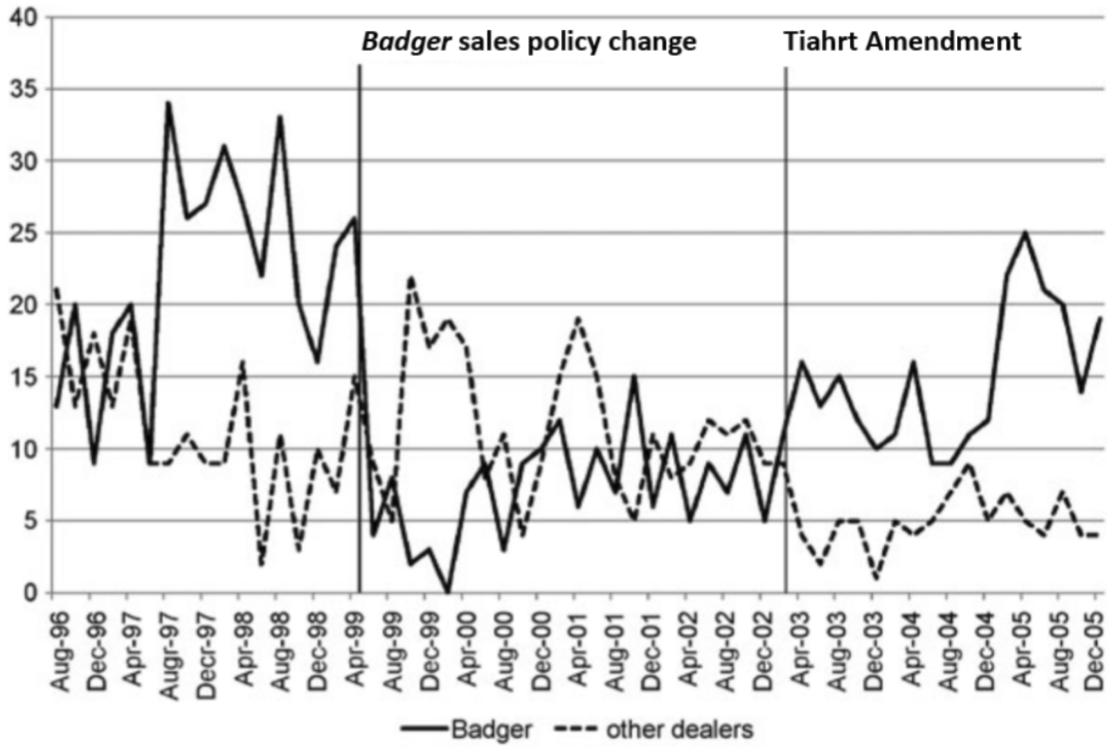 In the chart above, gun crime trace data was used from 1995 through 2005 from the Milwaukee Police Department, tracking guns sold by Badger and other dealers and then recovered from gun crimes within one year. The chart clearly shows a decrease in crime guns recovered within a year after Badger was identified as the number one seller of crime guns in the country – a decrease of approximately 77%. In short, the data transparency and reporting on gun crime trace data being available had a huge positive effect on guns sold by Badger being used in crimes.

Later in 2003, when the Tiahrt Amendment went into effect which eliminated this data transparency, an estimated 200% increase in guns sold by Badger and later used in crimes occurred within just another year or two.

The data clearly shows how powerful data transparency alone is in solving the problem of criminal diversion of guns – and how much the Tiahrt Amendment is a major contributor to this problem. Curiously, the impact of the Tiahrt Amendment does not show up with other gun dealers in as major way as Badger; perhaps this was because other gun dealers in the Milwaukee area were selling guns in a legal, responsible way.

Officials from New York City saw this data and wanted to replicate the decrease in their city. New York state had very strict gun laws, and most of the guns in New York City were coming from states outside of New York which had much more lax gun restrictions. Rather than using sting operations, New York City successfully sued many out-of-state gun dealers in an attempt to effect changes in gun sale policies, like installing better on-site security or reducing employee theft. The result of these lawsuits, many of which were settled, was a huge, 82% reduction in guns sold by these dealers being diverted for criminal use.

A study of gun crime trace data from over fifty cities in various US states shows that when a state has stronger gun laws regulating dealers, including requirements like:

gun diversion to criminals was lower; however, only when those checks were enforced (source: Seller Accountability Policies).

In short, strong gun oversight and regulation laws which require dealers to tighten up their operations lead to fewer guns diverted to criminals but only when they are enforced.

Next up: Waiting Periods and Red Flag Laws